In 1983 Franki Raffles was awarded a Kodak Bursary in order to undertake a project at Pinewood Special School in Edinburgh.

The project was designed to develop the creative expression of the children by teaching them to to take photographs, initially with Polaroid instant cameras, and later with 35mm cameras.

In many ways groundbreaking, the project was a direct result of Franki’s deeply held belief in the power of photography as a tool for social engagement and empowerment, rather than as exploitation.

The project was fully documented in a booklet, We Can Take Pictures, published by Community Service Volunteers (available below). She continued to be involved with projects with children and young adults with special needs for the rest of her life. An exhibition of her photographs and the work of the children was shown in the Houses of Parliament, Westminster, London, in 1985. 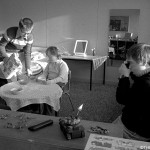 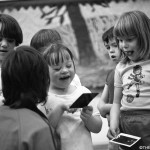 We Can Take Pictures Final Publication

This website uses cookies to improve your experience while you navigate through the website. Out of these, the cookies that are categorized as necessary are stored on your browser as they are essential for the working of basic functionalities of the website. We also use third-party cookies that help us analyze and understand how you use this website. These cookies will be stored in your browser only with your consent. You also have the option to opt-out of these cookies. But opting out of some of these cookies may affect your browsing experience.
Necessary Always Enabled

Any cookies that may not be particularly necessary for the website to function and is used specifically to collect user personal data via analytics, ads, other embedded contents are termed as non-necessary cookies. It is mandatory to procure user consent prior to running these cookies on your website.